OODINEX is a wide range disease treatment for marine fish in aquariums with invertebrates (such as sea anemones, corals and crustaceans). The unique formula solves a wide range of fungal, bacterial and parasitic infections. OODINEX’s wide range action means the danger of choosing the wrong treatment is virtually eliminated. If there are no invertebrates in the tank, it is recommended to use eSHa TRIMARIN, which has an even broader treatment range. 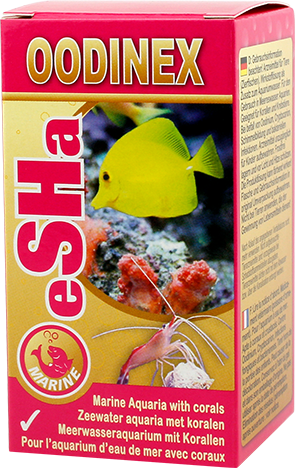 Fins
Watch your fish’s fins. Fins which are held close to the body signal an illness.

A list of specific disease organisms and conditions that OODINEX treats:

Some diseases are very difficult to diagnose or can be diagnosed incorrectly. For example, fungus may result from another problem such as finrot. Therefore, it is important to treat the root of the problem (finrot) as well as the resulting secondary infection (fungus). As OODINEX treats many diseases you have a very good chance of treating the root problem and improving your fish’s health. In some cases it is more effective to keep an eye out for a variety of symptoms which fish tend to exhibit when they are infected.

OODINEX treats a wide range of infections characterised by the above symptoms. These infections are often very contagious and can easily spread to healthy fish. The sooner you treat your fish, the better their chance of recovery.

Under what circumstances can I use OODINEX?
Can I continue filtering while using OODINEX?

You may continue to filter over non-adsorbing materials such as filter-wool, sand, gravel, etc. Always remove chemical ‘active’ filter media such as (fresh) activated carbon, UV (lights), oxidisers, resins and protein skimmers, as these can have a diminishing effect on the action of OODINEX. Keep filters running day and night.

Can I overdose OODINEX or extend the dosage plan?

Overdosing
It is not recommended to add more than the advised dosage when using OODINEX.

Should I do a water change before or after using OODINEX?

It is generally not necessary to do a water change before or after using OODINEX. However, there are a few exceptions where a partial water change should be carried out before treating the aquarium:

How do I dose OODINEX?
What products can I use after the treatment?

Can I use OODINEX in combination with other eSHa products?

We do not recommend using other eSHa products while using OODINEX.

Can I combine OODINEX with products from other brands?

Is OODINEX safe to use with invertebrates?

Unlike most marine treatments, OODINEX is safe to use in aquariums with invertebrates such as sea anemones, corals and crustaceans, there is no need to remove these from your aquarium. If you do not keep inverts in your aquarium then use TRIMARIN to treat your fish: TRIMARIN treats a wider range of symptoms / conditions in non-invert aquariums.