Your fish has worms? We got the solution! eSHa gdex is outstanding at controlling the likes of flatworms / skin flukes (Gyrodactylus), gill flukes (Dactylogyrus) and tapeworms (Cestoda), but at the same time it is tolerated by a wide range of plants, shrimp and filter bacteria. Combine it with eSHa HEXAMITA and you’ve got an all-round disease control for wild-import cichlids like discus fish. 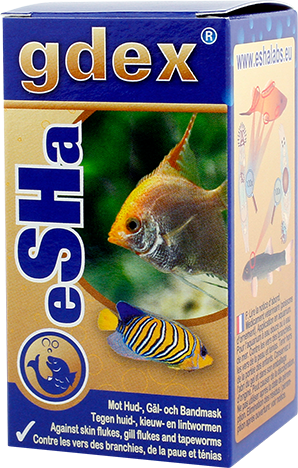 What does eSHa gdex treat?

There are a few noticeable symptoms of skin and gill flukes and tapeworms:

Under what circumstances can I use eSHa gdex?
Can I continue filtering while using eSHa gdex?

You may continue to filter over non-adsorbing materials such as filter-wool, sand, gravel, etc. Always remove chemical ‘active’ filter media such as (fresh) activated carbon, UV (lights), oxidisers, resins and protein skimmers, as these can have a diminishing effect on the action of eSHa gdex. Keep filters running day and night.

Can I overdose eSHa gdex or extend the dosage plan?

Overdosing
It is not recommended to add more than the advised dosage when using eSHa gdex.

Should I do a water change before or after using eSHa gdex?

It is generally not necessary to do a water change before or after using eSHa gdex. However, there are a few exceptions where a partial water change should be carried out before treating the aquarium:

How do I dose eSHa gdex?
What products can I use after the treatment?

Can I use eSHa gdex in combination with other eSHa products?

eSHa gdex can be used in conjunction with:

Can I combine eSHa gdex with products from other brands?

Over the years, we have been receiving many questions about eSHa gdex and we have decided to answer them in this video!