GASTROPEX effectively combats aquatic snails in your aquarium. Use GASTROPEX to stop snails destroying aquatic plants and transmitting disease to your fish. In addition, GASTROPEX clears cloudy water caused by bacterial blooms and also combats ‘hydra’. eSHa GASTROPEX is safe to use with freshwater tropical and coldwater fish and plants. Another advantage is that unlike many other treatments, no water change is required after use of GASTROPEX. 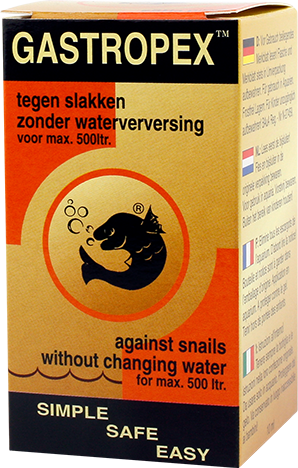 IMPORTANT INFORMATION!
How do I know when to use GASTROPEX?

If snails can be seen in the aquarium, on the glass or in the gravel, then GASTROPEX should be used. Snails are relatively common in aquariums and in small quantities pose few problems. However, they pollute water and become a serious nuisance, so take action sooner rather than later. When you have a snail epidemic, removing them by hand again and again becomes a time-consuming chore. Total removal of all snails is nearly impossible and usually the epidemic returns. Use GASTROPEX to eliminate all aquatic snails including those hidden in the sand, gravel, plants and decorations.

Snail epidemic
It is strongly advised to remove as many snails as you can by hand before or just after the treatment. If there is a very large snail die-off, the dead snails will rot and pollute the aquarium water. This in turn may harm your fish and plants. Syphoning your gravel to remove the dead snails buried in it is also advisable (for example, the Malayan live-bearing snail abounds in substrate).

Snails are not essential for maintaining a healthy aquarium, although some people like to keep them as an ornamental feature. However, snails can transmit diseases to your fish, as they are hosts for a range of parasites. They consume and ruin aquatic plants and can look unsightly. In addition, they reproduce at an alarming rate and can take over your aquarium in a short period of time. Large quantities of decomposing snail waste pollutes the water, which is bad for your fish and plants. In aquariums which are used for breeding, snails pose a problem as they eat fish eggs.

What precautions must I take when using GASTROPEX?

Please remove as many snails as possible from the aquarium before you start the treatment! GASTROPEX will kill snails and algae: do not let shrimp, crayfish and fish eat these dead and decomposing snails and algae, because they may cause food poisoning when eaten. When you have shrimp, crayfish or fish, which eat this dead material, we recommend to remove dead snails / algae and syphon the bottom during and directly after treatment.

Can I continue filtering while using GASTROPEX?

You may continue to filter over non-adsorbing materials such as filter-wool, sand, gravel, etc. Always remove chemical ‘active’ filter media such as (fresh) activated carbon, UV (lights), oxidisers and resins, as these can have a diminishing effect on the action of GASTROPEX. Keep filters running day and night. After using GASTROPEX it is advisable to install a newly grafted filter in your aquarium.

Can I overdose GASTROPEX or extend the dosage plan?

Should I do a water change before or after using GASTROPEX?

It is generally not necessary to do a water change before or after using GASTROPEX. However, there are a few exceptions where a partial water change should be carried out before treating the aquarium:

How do I dose GASTROPEX?
What products can I use after the treatment?

After treatment we strongly recommend that you give your fish a daily dose of eSHa OPTIMA, to keep them in good health. eSHa OPTIMA is a unique combination of the essential components found in tropical rivers, lakes and streams. These components are blended with trace elements, minerals, vitamins and natural growth enhancers to give your fish what they are accustomed to in their natural environment. eSHa OPTIMA stimulates and supports the natural immune defences and speeds up full recovery from illness.

Can I use GASTROPEX in combination with other eSHa products?

We do not recommend using other eSHa products while using GASTROPEX.

Can I combine GASTROPEX with products from other brands?

There is sediment in the bottle, is this a problem?