eSHa alx works against parasitic species of crustaceans (Crustacea), such as carp lice (Argulus sp.), anchor worms (Lernaea sp.), gill lice (Ergasilus sp.), etc. The parasites occur on and in the skin of fish and on the gills. eSHa alx gets rid of them quickly! 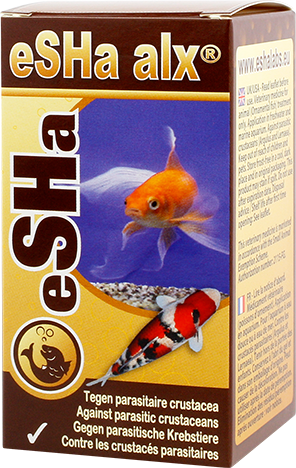 Disease diagnosis is the first step towards successful and rapid disease cure. Most fish diseases are highly contagious and spread quickly in aquarium conditions, so prompt diagnosis and treatment is advised. There are some ‘early warning signals’ which should be watched for as these can indicate the onset of a disease, like swollenness, emaciation or reduced appetite.

What does eSHa alx treat?

eSHa alx is a veterinary medicine for ornamental fish against parasitic species of Crustacea (Maxillopoda), such as Argulus (carp lice), Lernaea (anchor worm), Ergasilus (gill lice), Salmincola (gill lice), etc. The parasitic Crustacea occur on and in the skin of fish and on the gills.

There are a few noticeable symptoms of parasitic Crustacea:

Under what circumstances can I use eSHa alx?
Can I continue filtering while using eSHa alx?

You may continue to filter over non-adsorbing materials such as filter-wool, sand, gravel, etc. Always remove chemical ‘active’ filter media such as (fresh) activated carbon, UV (lights), oxidisers, resins and protein skimmers, as these can have a diminishing effect on the action of eSHa alx. Keep filters running day and night.

Can I overdose eSHa alx or extend the dosage plan?

Overdosing
It is not recommended to add more than the advised dosage when using eSHa alx.

Should I do a water change before or after using eSHa alx?

It is generally not necessary to do a water change before or after using eSHa alx. However, there are a few exceptions where a partial water change should be carried out before treating the aquarium:

In cases with little or no improvement a 50% water change is recommended without dechlorinators or oxidisers, after which the treatment can be repeated. If any unknown complication occurs immediately,  either transfer the fish to another aquarium or do a partial water change and / or filter over fresh activated carbon and contact your expert retailer.

If you want to use another treatment straight after using eSHa -alx, you can remove all components by filtering over fresh activated carbon or perform a major water change.

How do I dose eSHa alx?
What products can I use after the treatment?

Can I use eSHa alx in combination with other eSHa products?

eSHa alx can be used in conjunction with:

Parasitic crustaceans often cause skin irritations / damages. As a result, the risk of secondary fungal or bacterial infections is very high. We therefore recommend that you always combine eSHa alx with eSHa 2000.

Can I combine eSHa alx with products from other brands?

What kind of parasitic crustaceans are there?

Carp lice (Argulus)
This is a greenish, transparent, round crustacean with black dots across its entire body. It can become up to 8 mm in size, uses two suction cups to attach itself and a sting to pierce the skin of the fish. Adult carp lice mate on the body of a fish after which the female leaves and deposits approx. 300 eggs in the aquarium/pond, after which she dies. There are many species of Argulus. The development of their eggs is temperature dependent. Depending on species and temperature, hatching can take anywhere from a few days to a couple of months. Some eggs can overwinter before hatching. The young are free-swimming and after a number of moults they search for a host. When a host is found, they develop into an adult carp louse in approximately two months and are then sexually mature. The cycle is therefore strongly dependent on temperature. Young fish can be killed by a single sting.

Anchor worms (Lernaea), gill lice (Ergasilus & Salmincola)
Only the female is parasitic, and uses nutrients and blood taken from the body of the fish to develop her eggs. The eggs are in two egg sacs located at the tail end of the parasite. When the eggs are ripe the sacs fall off. The young from these eggs are free-swimming whilst they develop into mature parasites and will then look for a partner. After mating the female searches for a fish and the cycle starts again.

Anchor worms (Lernaea)
An anchor worm is a long string protruding from the fish with two ‘tails’ (the egg sacs). Anchor worms can be up to 2 cm long. They can attach anywhere on the body of a fish but mostly appear on the underside. For example at the base of the tail fin or between the gill and pectoral fin.

Gill lice (Ergasilus & Salmicola)
These parasites often occur on the gills but also on the gill covers, fins and in the mouth. The parasites can be seen with the naked eye (± 2 mm) and are clearly visible with a magnifying glass. The fish lose weight, become weak and
listless, and the gills become pale due to anemia.